If you are having a Migraine right now, I know that reading might just be too much.

If that is you then just try the primary technique I use to stop a migraine headache, I put it fully guided in the video below.

After you do it you can continue reading. It takes about 7 minutes to do, and it is totally worth it.

If you’ve watched the video, and performed the exercise with me on the screen one of the following things would have happened:

If it is any one of these cases then you need a couple more of these exercises. Go to the end of the page to see were you can access them.

How To Stop A Migraine

There are three main things that happen in the brain when we have a migraine:

So to stop a migraine we have to undo these three things. We need to:

Before I tell you in practice how to do this you might want to know a bit more about these three parts of the nervous system. but you can also skip to the more practical part.

What Causes Migraines? A Deeper Look

first thing to know is that the 3 factors I listed above were listed in the order of how we work to solve the migraine, because we will always work backwards, but in fact migraines are caused by the reverse process

The Sympathetic Nervous System is one half of what is called the Autonomic Nervous System. this is the part of the nervous system that regulates our deep body functions. It has two parts:

We need these two systems to be in balance to live a happy healthy life. But in migraine, the Sympathetic Nervous System becomes chronically active, when it is constantly active it gets depleted. And it’s actually when it is depleted that we suffer the Migraine symptoms.

So we are going to need to let this part of our nervous system rest.

Another factor in Migraines is that a process called a cortical spreading depression (CSD) which is a kind of electrical storm that spreads along the brain, where suddenly all the neuorons on the surface of the brain become active. this creates various phenomena like the migraineous aura (that’s why in visual migrain aura for example it starts in one area and spreads across the visual field).

This storm is thought to leave in its wake many inflammatory chemicals, which then trigger pain receptors and starts the pain phase of the migraine attack, this is why the Aura precedes the pain. 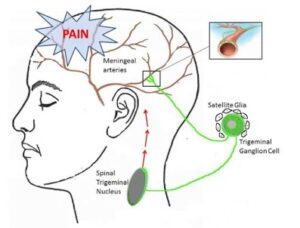 Finally, the main symptom of pain that comes with the migraine is caused by a center deep in the brain called the TCN becoming uncalibrated. The TCN monitors the main nerve of the face and head, the Trigeminal Nerve.

Normally this center is supposed to inform us when we feel pain coming from the face, like in the case that we were cut or stung by a bee, but in a migraine this center begins to send signals of pain without any cause. why it does so is unclear, but what is important is that we have a way to undo this. let me explain this way now.

How The Method I demonstrated Stops An Active Migraine

Ok, so now I’ll explain how the method in the video works. It’s very cool. It looks very simple, but actually it is a very complex bio-hack that we are applying to ourselves. And when you understand the complexity of it you will understand why no medication or gadget can do what you just did youself

The pressure that we apply on the sides of the temples presses on the nerve endings in those areas. When that happens it triggers the TCN, the part deep in the brain which is responsible for the pain in migraines, this is why the pain temporarily increases.

Then we use two bio-hacking techniques to Recalibrate the TCN.

One is the awareness that we keep, not reacting and just observing, this awareness activated a part in the front of the brain called the Medial Pre-Frontal Cortex, and this part of the brain can start to recalibrate the TCN, it kind of tells the TCN “look, this is not pain, it’s just pressure”.

But we need to apply another trick to get the TCN to accept the calibration, and this is where the posture, the movement, the weird mouth position and the breathing come into play.

All these together activate a nerve called the Vagus Nerve which completes the action of the recalibration.

You may have heard about the vagus nerve, because there are gadgets that are supposed to activate it externally with electricity to help with migraines. this nerve connects the gut and many other organs to the brain, it is this nerve that is responsible for many of the digestive side effects of migraines.

Why does the pain move to another location in the head? 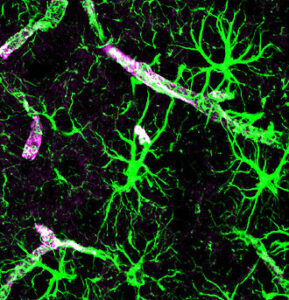 Most often by the time you realize you have a migraine the Spreading Cortical Depression has already ended, so our task is more how to relieve the leftovers of the cortical spreading depression.

If you do manage to catch the Spreading Cortical Depression as it is happening the application of the technique I showed you, with some personal guided instructions can help. but this requires more space than I have here to explain so I will keep that for a future post.

The main way to get rid of the inflammatory substances from the brain is to allow the the self cleaning mechanisms of the brain come into effect. In the brain there is a kind of drainage system called the Glymphatic System.

This system is most active when we are asleep and especially when we are lying on our sides. That is why sleep help to recover from migraines. What I do is I use is a technique coming from the world of yoga that makes the sleep even deeper, which can be applied after the techniques.

What To Do Next

As I wrote above if you have done the technique I was demonstrating your Migraine may have been relieved only temporarily, or just diminished, or most likely moved to another part of the head. This happens because while we re-calibrated one part of the TCN, until we have re-calibrated it completely it can become un-calibrated again.

So what we need to do now is to re-calibrate a couple of more spots. how many? this really depends on the intensity of the migraine. For a mild Migraine it can be one or two more techniques, for a severe migraine it can be 5 or 6, or even more. some of the techniques only take a minute to apply, some take more.

How Many ‘Re-calibration Techniques” Are There?

How Can I get all these ‘Re-calibration Techniques”?

I have made guided videos like the one you watched for each of these techniques. I have made videos explaining how to combine these techniques, in which sequence to apply and when. As well as a Migraine cheat-sheet that can guide you wherever you are.

And then I wrapped everything up together with a bunch of other videos with prevention techniques, auxiliary techniques and tips and made into an online course.

And then I made this website, to find you, who needs this method. So you can have access to this method, so you can learn how to reset your brain and to stop any migraine.

Here is what some of the people who have tried it have to say about it:

Can I ask you about this method before committing to purchase it?

Of course! If you are not sure write me a message, I’m always happy to answer. just use the contact form below and send me a message